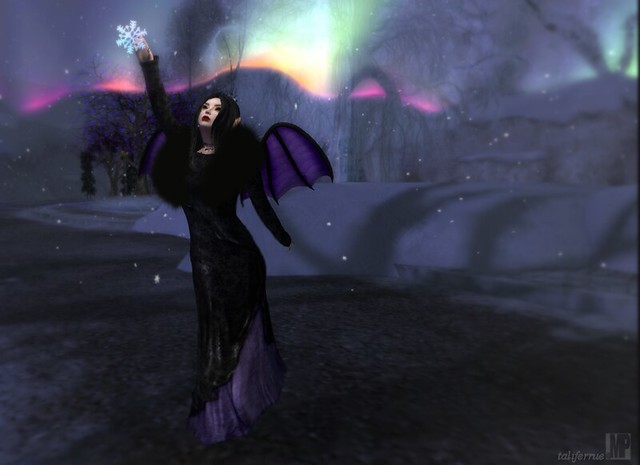 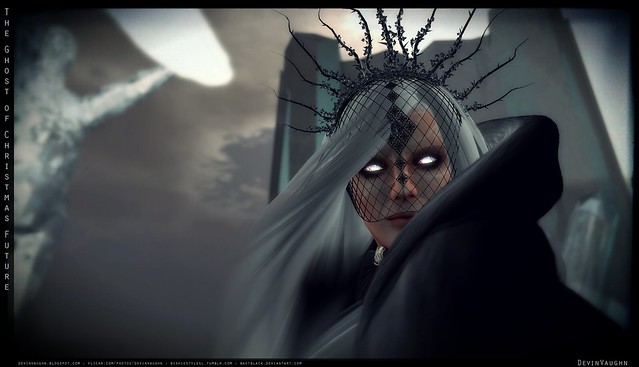 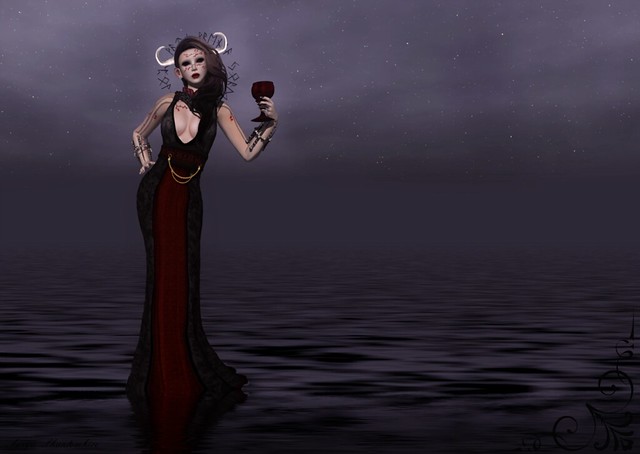 Only a few days left in 2014 (thank goodness -I personally will be more than happy to see the end of it.) But Gothmas by Gaslight is still humming along through January 3.    Now that the press for time in RL has started to ease up a bit, people are filtering back upstairs to enjoy the snow, music and shopping at GxG.  The submissions to our Flickr pool have been lovely, and we’ve all been enjoying the images that have come to us.

It’s been pretty low key as it generally is in December, though for some reason on Xmas eve the sim sort of fell over and scripts went wonky for several hours. Gremlins, I suppose.  But it seems to have righted itself and I see people wandering around in their winter finery each time I go upstairs. I still have to do my shopping rounds too!  Obviously, this is our last event of 2014, and we’d definitely like to thank all the people that come back (merchants, bloggers and shoppers) over and over to tell us to keep doing whatever it is we’ve managed to concoct.

Our next event is the January round of A Tattered Page , which is a combination of an event, a book club, and a mad scientist’s experiment all in the same package. That opens on January 7 (yeah we know, it’s not much time.) But just as importantly, applications for Futurewave will open on January 1st (probably in the evening.) Given what happened last year, we expect it to sell out *very, very fast*.

But we still have to get through the rest of this year before we can get to that. So come on up and enjoy the winter in the darkness.  The lights cast excellent shadows and the shopping is great. 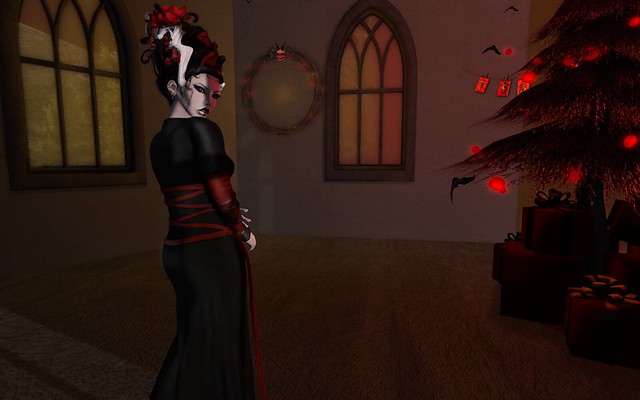 Today! (That’s December 23) from 4-6PM Pacific Time (SLT) Alisa Perne will be guest DJing at the Gothika Mobile Unit.  She usually DJ’s over at Club Zero, but as happens she lives on Cursed full time(much to our collective delight), so she decided to come on back to the mobile unit to have some fun for a couple hours. Alisa’s a pretty terrific person and it’s going to be a ton of fun (and I probably should decorate her house for gothmas… um. oops. Yeah. I need to get to that…) but come on up and get some gloomy licks in before the madness begins tomorrow in earnest. 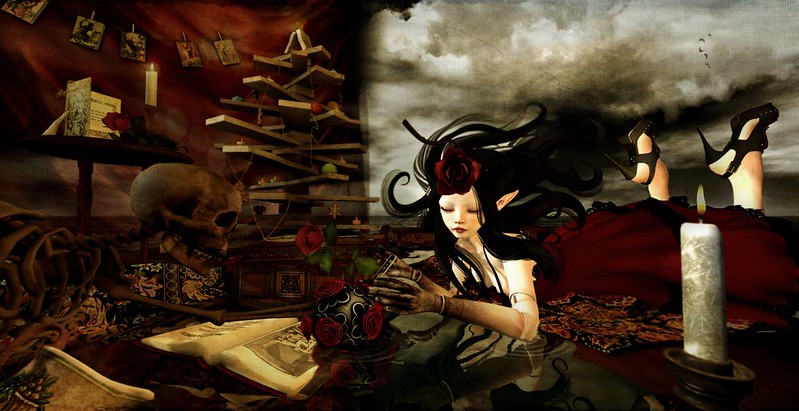 If you see something you like when visiting Gothmas by Gaslight, you might also be able to gift it to your friends and family. We had new gifting-enabled vendors available for those merchants who wanted to use such. The vendors are marked with gifting option words and if in doubt, you can simply edit-check the contents to see if the script has gifting option mentioned in its name.

The gifting works so that you pay the vendor normally and then a special menu with the gifting option will pop up. You will need to know the UUID of the person you want to send the gift to and insert it so the script knows who the recipient is. Since we do not use networked vendors and LSL operates on UUIDs, not names, this was the only way to make it work.

If you use a viewer that has the old style profiles in use (like Firestorm), you can see the UUID on top of the profile, right under the avatar’s name. If you use the official viewer or web profiles, things get trickier. Click here for the information on how to find the UUID in that case.

Come over to enjoy the snow and silence, to share the gifts of the darkest of seasons!

As noted yesterday we have new, updated maps. Here they are. I’ll put them on the merchant list page, also.  We’re racing around trying to get last minute stuff done.

Over the past couple of years MANY people have asked us for a group for shoppers and gacha traders.  (many. )  The reason we never did it was because there were very poor group management controls available to us, and none of us has the time or patience to babysit an open group.  However, the newest release of Firestorm contains the LONG awaited group ban function.  As promised, as soon as it dropped, I installed it and created a group. It’s called Cursed Shoppers, and will cover all our events in order to save group space. The group is open and free to join.  The group key is here:  fe9d4c5b-4fa9-a1df-dd7e-adb54a334366 .  It will take some time to populate, but merchants are welcome to join and send out demos if they like, or whatever else they’ve got.  Gacha trading is welcome and you can ask questions about our events there too if you want to.  Have at, people.

Whoo boy. A whole bunch of stuff to update everyone on.

ok.  First of all there’s this:

1. If you are a merchant in this year’s Gothmas by Gaslight, you need to have your booth at least partially set up by 8pm SLT tonight. I don’t care how much is done, but there needs to be some sign that you’re showing up in there (unless I talked to you previously about it.)  If you aren’t, we are pulling your booth up.  We are *not* going to wait for people to first show up tomorrow morning. We need to know who’s coming and who isn’t. You dont need to be done, but you need to have started.  If we pull your booth, we will not accept you to another Cursed event until next year’s GxG. We aren’t playing around about this- it’s a giant pain in the ass when people stand us up.  We don’t mind if people drop out. We mind when people don’t tell us that’s happened.

2. we have maps.  I will post them here, and they will also be on the merchant page as well. Here’s the thing- they are subject to change. There’s a version number in the lower right corner. The website will always have the most recent maps, but I know these get passed around, so this way you can check to see if yours is accurate. That said, I EXPECT them to change rather drastically overnight. When in doubt, the thing to do is check the merchant list- it has direct teleport SLurls to all event booths.

As always the maps face the same way you do when you land.  I have added a compass rosette to reflect which way the maps are oriented.  If you have trouble with this, use the direct SLurl links provided on the merchant list. Click on them to make them bigger.

3.  We may, or may not be delayed in opening through no fault of our own. Right now LL has an asset server down, which is preventing people from doing their work in a timely manner. Further to that, I personally have a support ticket in to LL regarding a technical problem (their end, not our end) on Sium.  Worst case is we push back a couple hours, but we will not know until LL gets its act together on both problems.

I will have more info as I have…well, more info.  stay tuned gang- the snow hasn’t even started falling yet.